Home / News / An Intersect Segment: Interviews with an eRA 2

An Intersect Segment: Interviews with an eRA 2

Intersect is kicking off our news for the year with the continuation of our very first eRA segment, Interviews with an eRA. In this article, we have interviewed Aidan Wilson, who in his time at Intersect, has worked across several universities with research from a range of disciplines. Aidan is currently Intersect’s eResearch Analyst at Australian Catholic University, where his role includes administering the REDCap system, delivering user training, and supporting ACU’s users with consultation and advice.

Past Experience: Aidan has 9 years of experience at PARADISEC as data manager, archive systems officer; 7 years as Field Linguist and researcher. 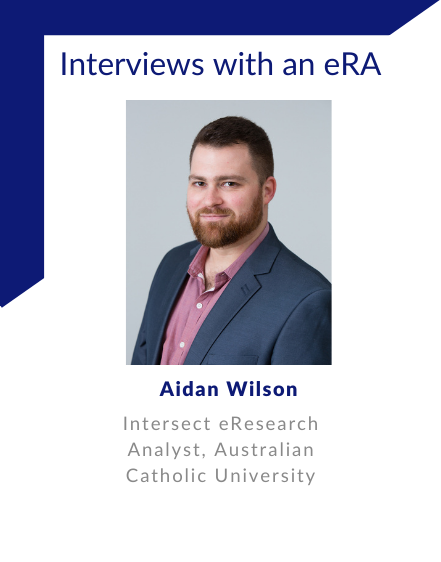 What discipline did you complete your studies in?

My undergrad and Masters (Research) degrees were both in Linguistics. I completed my Masters on the verb morphology of the Traditional Tiwi language spoken on the Tiwi Islands north of Darwin. I have a little bit of family history with this language, so when I started linguistics I had that in the back of my mind. During an undergraduate course on Australia’s Indigenous Languages, I noticed Tiwi hadn’t been documented in a long time, and decided then and there that that was what I wanted to focus on in my postgraduate research.

Why are you passionate about research generally?

I’m passionate about research because the results of my work have intrinsic worth, at least to me. I’ve got friends who work in a corporate environment and I can’t say they value their work in the same way. For people who work in a lot of those jobs, it seems unrewarding to them. Research is inherently rewarding. Hopefully anyone who is doing research is personally interested in wanting to make a difference or improve society’s understanding of humanity and the world. That’s why people become researchers. It is an industry that I feel very strongly about. And it is work that someone needs to be doing.

What inspires you about Intersect?

Before I worked for Intersect, I had developed an interest in helping researchers do their best. This is  something I saw at Intersect that I really gravitated towards. That’s how you would define the eRA role – A core part of its mission is to help researchers do research. It’s been something that has been easy for me to do as it coincides so well with my interests and gives me job satisfaction. I can also see that everybody else here has that same goal. We’re not driven by profits – we’re driven by our members’ success. It is more about what they can get from us rather than what we can get from them.

What is a project that you have worked on as an eRA that you are proud of?

When I was working in a more data science-related role at Intersect, we built a system for the Cytogenetics department at Sydney Children’s Hospitals Network to help them build a local genetic sequencing facility. They had been reliant on other facilities to do the sequencing, and would send wet samples across Sydney. The sequenced images would then be sent to the US to be aligned, and the aligned files returned to the hospital on a hard drive delivered via courier. This whole process would take weeks and add huge delays to important diagnostics for patients.

To fix this, SCHN bought their own sequencer but had trouble enabling their data pipeline and replacing the existing process. So Intersect came in and helped SCHN and NSW eHealth to provide the right network setup for the sequencer to physically work. We also built a cloud-based data pipeline so that the samples would be sequenced, and the images sent to Intersect Space, where a cloud computer would see them and run the alignment process and send the resulting aligned files back to the SCHN network. The result was a fully automated process that took hours instead of weeks.

They were extremely happy with the results and I am very proud of my involvement as an eRA. I was able to creatively think up solutions and bring those ideas to the various technical teams to work on implementing them. eRAs are jacks-of-all-trades, and understand enough of the technology to make sure the experts know how to solve the issue.

In my time as eResearch Analyst at ACU, I am particularly proud of the maturing of the REDCap platform. When I started, this was an application used only by a few researchers, and without much input from the Research Office. I’ve since helped out with dozens of research projects using this platform. We provide training, guidelines, user support and now it’s a really well run service, and is recognised by the university as a core research system.

What is something that you’ve taken away from your role as an eRA?

As an example, when I started I had only very basic knowledge of programming. Having to draw on these skills in my work with researchers has taught me a lot, and now I am quite proficient in a few languages. I use them daily for lots of my work, and I now teach them to researchers. It is a similar story for other skills outside of programming too. My technical and interpersonal skills have improved by working with people from a variety of backgrounds, and I really value the diversity of this sector, and the friendships that I have developed with the many researchers I work with.

For any enquiries regarding Intersect’s eRA services, please contact: eresearch@intersect.org.au

Back to news
Your browser is not supported. Please upgrade your browser.